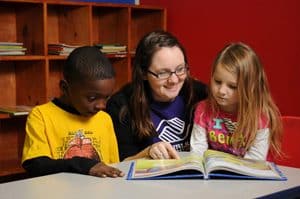 The Boys and Girls Club of Southwest Virginia.

Since First Steps was established in 2016, we have benefited from a partnership with Virginia Tech researchers Dr. Robin Lemaire, Associate Professor at the Center for Public Administration and Policy, and Dr. Donna Sedgwick, Assistance Professor in the Department of Sociology. Dr. Lemaire’s expertise in network analysis and governance has allowed us to understand how providers are working together and where the Community Foundation and other partners can invest time and funding to create a stronger, more resilient early education and development system. Dr. Sedgwick’s expertise on collaborative processes have helped each of our working groups to understand the essential aspects of working as an effective team to address common concerns. Their ongoing partnership has also allowed us to document the impact of First Steps activities, giving us compelling evidence that our efforts are benefiting agencies and the families they serve.

First Steps was launched following the completion of an initial network study aimed at understanding the early childhood education and development (ECED) landscape. The study included a survey of over 50 nonprofit agencies, libraries, and public schools to determine whether and how agencies serving young children (ages birth to 10) and their families were working together and their common challenges. Survey respondents were asked questions about their relationships with other agencies and shared insights on regional needs and challenges related to early childhood. Responses were used to create a visual representation of the ECED network and to spur conversation around strategies for increasing collaboration and coordination among agencies. Results from the Initial Network Study are available here. Following the results of the network survey, the CFNRV and partners hosted three regional workshops in Summer 2016. Participants used the survey results to develop a set of common priorities:

Following the initial study, network members elected to focus on the first priority: Creating an information hub. A core of about 15 agency leaders met throughout 2017 to discuss and learn about examples of effective information sharing and referrals. This working group increasingly became convinced that face-to-face interaction was the most effective way to build meaningful and lasting relationships between agencies. In 2018, the group launched Meet Yourself sessions, a series of workshops with short talks by area providers and time for structure networking to build relationships. Each attendee was given a resource binder with contact information from NRV agencies as well. Since 2018, First Steps has held 15 sessions for more than 200 providers. Throughout both the working group discussions and Meet Yourself planning efforts, Drs. Lemaire and Sedgwick worked hand-in-hand with the working group to support the efforts and to collect data on how the group was working together and making decisions. Regular short surveys and interviews with working group members and Meet Yourself session attendees, provided a deeper understanding of how the network was evolving.

In 2019, the research team elected to conduct a second network study to see how relationships between members had evolved and to gather feedback from participants on the impact of First Steps activities. Respondents were again asked to indicate the types of relationships they had with other agencies and the strength of those connections. They also answered questions about how First Steps was affecting their organization and the larger ECED system. Compared to the initial study, the 2019 results showed a greater number of connections between agencies and a much more robust network. It also indicated that respondents saw the benefits of the networks in areas such as information sharing and raising awareness about the importance of early education. A brief overview of the entire research partnership and key 2019 findings can be found here.

For more information on this research, contact Dr. Lemaire at rlemaire@vt.edu or Dr. Sedgwick at sedgwick@vt.edu